Busy day for Rob with the press! Morning at Rogers TV, then CityTV's Electric Playground and after that CBC. 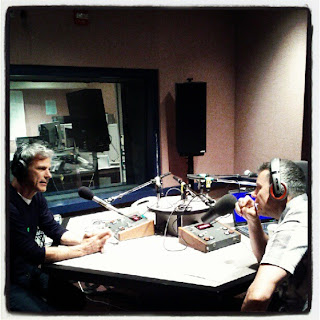 Posted by SlaughterNickMovie at 12:08 PM No comments:

Hey, fans! This just in... first review of the film.

"One of the most unconventional yet uplifting documentaries in years. 4 out of 5 stars." -- John Dash, T-MAK World

Our own Toronto weekly NOW Magazine tips the hat to the many influences of the Montreal protests but they're missing a very key player in the birth of the recent resistance movements.

During the shooting of our feature documentary SLAUGHTER NICK FOR PRESIDENT we learned of the Serbian organization called OTPOR ("Resistance" in English), founded by Srdja Popovic and his student comrades in the '90s. OTPOR led a non-violent revolution which toppled brutal dictator Slobodan Milosevic.

Using the valuable lessons from their successful peaceful action, Popovic and colleagues went on to found an organization called CANVAS, the Centre for Applied NonViolent Action and Strategies. And here's where it gets interesting -- CANVAS was the organization that actually trained the agitators of the Arab Spring in the ways of peaceful resistance, which was the inspiration for the Occupy Movement... and so on... and so on.... Pass it on!

Posted by SlaughterNickMovie at 5:49 PM No comments:

Did we tell you our World Premiere is happening at the NXNE Film Festival June 16, 2012?! Check out the trailer for the Fest...

Hey, so maybe you don't know anything about Serbia. We didn't know much either before we went over on our fact-finding mission. It's a beautiful country with friendly people.

Start here to get a primer on the little Balkan country that has become so dear to our hearts...

Posted by SlaughterNickMovie at 12:47 PM 3 comments: